Video:
Why I founded a female only orchestra 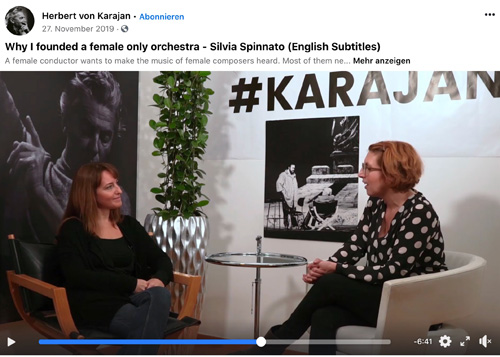 An unusual request
The composers should be female – this was the somewhat unusual programme specification for a series of orchestral concerts Italian conductor Silvia Spinnato was invited to conduct at home in 2017. More precisely, the works should be by non-contemporary female composers. This gave Spinnato the incentive to research the oeuvre of female composers between the end of the 18th century and the beginning of the 20th. She discovered a wealth of material quite unexpected, for even during her intensive studies, she had never come across these remarkable orchestral works written by women.
The oeuvre of female composers is still wellnigh non-existent in concert halls worldwide. There is, however, an abundance of worthwhile orchestral pieces by female European and American composers, ranging from Maddalena Lombardini Sirmen (1745-1818) through Emilie Mayer (1812-1883) to Amy Beach (1867-1944).
These highly talented women were generally prevented by the patriarchal social structure of their time from publishing or even performing their orchestral works in public. At the end of her life, French composer Mel Bonis (1858-1937) said to her daughter: „I shall die with the regret of never having heard my works.“ The prevalent maxim at the time was that „the fair sex“ was simply not equal to coping with great, complex compositions. Studying the scores, Spinnato was convinced of the opposite: many of these composers had a masterly command of counterpoint and orchestration.

The idea was born
To found an orchestra of young female professionals as a musical ambassador – the idea was designed to put a definitive end to this regrettable gap in concert programming. After all, who could be better suited to giving, at long last, a well-deserved voice to these neglected composers and their works? No sooner said than done. In 2019, Silvia Spinnato launched the Female Symphonic Orchestra Austria (FSOA), based in Salzburg. Since then, the highly motivated musicians have devoted themselves to rehearsing orchestral works, mainly unknown or worth rediscovering, by long-forgotten female composers from the Classical and Romantic periods.

Stage clear for female composers!
The well-attended première of the FSOA was held in Salzburg on 28 November 2019, to enthusiastic audience applause for the first-rate, soul-stirring performance of this undeservedly long-neglected repertoire. The exceptional success was not only confirmation that the concept can work but also, above all, encouragement to continue this ambitious project under all circumstances. In Spinnato’s collection of scores, the works of Mel Bonis already have their permanent place between Beethoven and Brahms, those of Emilie Mayer between Mahler and Mozart. In future, this should be so everywhere.

Success means commitment
The aim of the FSOA is to sell concerts with this revived repertoire to as many organisers as possible, thus contributing to the promulgation of orchestra literature composed by women and well worth hearing. At the same time, the intention is to move gradually towards self-financing; in the current phase of development, the FSOA is dependent on public cultural funding and donations.

The FSOA is grateful for any form of sponsorship or support. The musicians are totally committed to bringing this repertoire to a wide audience and to establishing it permanently in concert programmes.